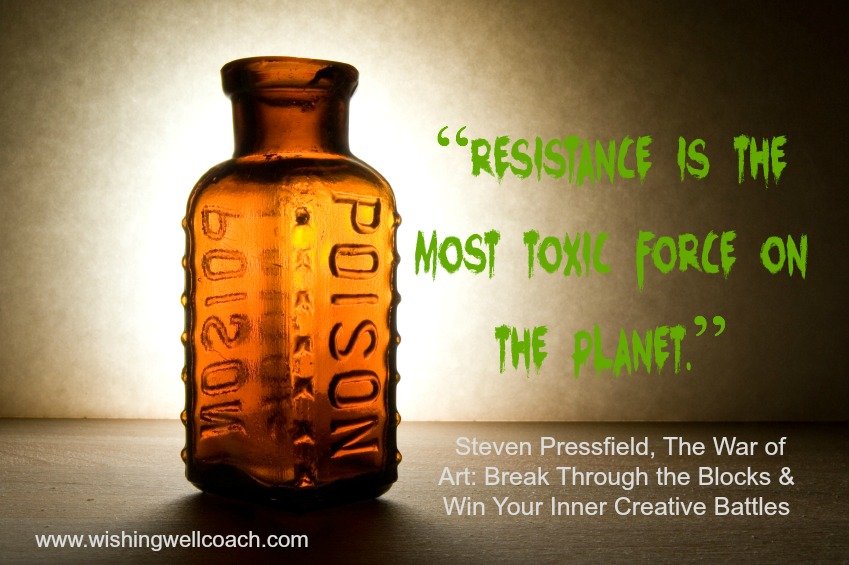 Resistance is what is preventing you from being the “you” that’s in great shape and runs half marathons. Or the one that’s actually written a novel (not just dreamt about it), or painted the picture, taken the cooking class, or done any number of things that you dream you’ll do – someday.

Resistance is, in its most basic form, fear. Resistance doesn’t want you to evolve from the person you are now to your higher self.

Pressfield does a masterful job describing resistance and its power over you. If you haven’t read his book, you should drop everything and order it right now through my Amazon Bookstore. It’s a quick read, and I promise you, you will never look at passion, purpose, motivation or procrastination (among other things) the same way again.

So the point of this post isn’t to cover the same ground.  Instead, today I want to look at one idea:

“Like a magnetized needle floating on a surface of oil, Resistance will unfailingly point to true North – meaning that calling or action it most wants to stop us from doing.

We can use this. We can use it as a compass. We can navigate by Resistance, letting it guide us to that calling or action that we must follow before all others.”

As a coach, my clients expect that I am going to hold them accountable. Among other things, that’s what many of them come to me for.

We’ve dropped the ball, been lazy or forgotten. It happens. We’re not perfect and we’re overcommitted. That’s when holding someone accountable is really useful.

It’s helpful to know before you drop the ball that you’re going to have to face the music, and therefore be less likely to not follow through in the first place. And if you do end up dropping the ball, having an accountability partner can help you to keep your attention and will power focused on the goals you have set out for yourself.

But there is an implication with the idea of accountability that when someone fails to follow through, they’re going to be “in trouble,” and they’re really going to hear about it from their spouse, their boss, or their coach. Holding someone to account has taken on an air of turning up the heat on them and making them sweat about why they didn’t follow through with what they said they’d do.

And this is a real problem in this second type of situation.

Situations where something deeper has happened. Where we’ve encountered resistance, or fear. Because turning up the heat actually makes things worse.

My 5 (almost 6! can you believe it?!) year old is nervous about getting into new situations sometimes. A common situation in which she’d be afraid when she was a bit younger was a birthday party with a bunch of kids who were already (loudly) having fun, especially when she didn’t know some of them.

She’d arrive, feel timid, and wouldn’t quite know how to enter the group. If I tried to push her to get over it, she dug her heels in, more afraid than ever. If we sat down, talked it through, then she felt she had a choice about whether to stay or go, she almost invariably would stay and have fun.

Now while you might not be able to relate to this specific example, taking it down a level to “child’s play” makes it easier to see what’s happening: You can’t successfully “push” through a fear for very long. That’s white-knuckling it, and you’re bound to break-down and revert to your old speed-eating-Doritos way, instead of going to the gym.  It’s much better to try to truly  understand your fear and by doing so, allow it to pass.

Your resistance to the things that you want and need most in your life are no different, whether you’re already in touch with that “calling”- as Pressfield isn’t ashamed to name it – or not.

Instead of holding yourself to account (with all the accompanying guilt, shame and self-flagellation) about why you, yet again, failed to: say no, get to the gym, sit down to write, take out your paint brushes, listen to those old records again, or do any number of things that feed your soul, what if, instead, you worked to understand the fear and where it was coming from?

What if you worked to understand what was behind it?

What if you tried to make sense of why it feels so impossibly hard to do something as simple as lift a paintbrush or press a computer key?

And resistance will do its best to trick you into believing that your excuses are insights, and that your BS is pure genius so that you will only stay stuck.

That’s where accountability comes in. Because deep down, you know when you’re fooling yourself and so do I.  And we both know it’s a waste of time.

If you’re ready to stop ingesting the most toxic substance on the planet, begin by holding yourself accountable to the truth about why you’re really afraid to do what you’re called to do, and start living to your highest self.