How to Deal with Problems Without Crashing 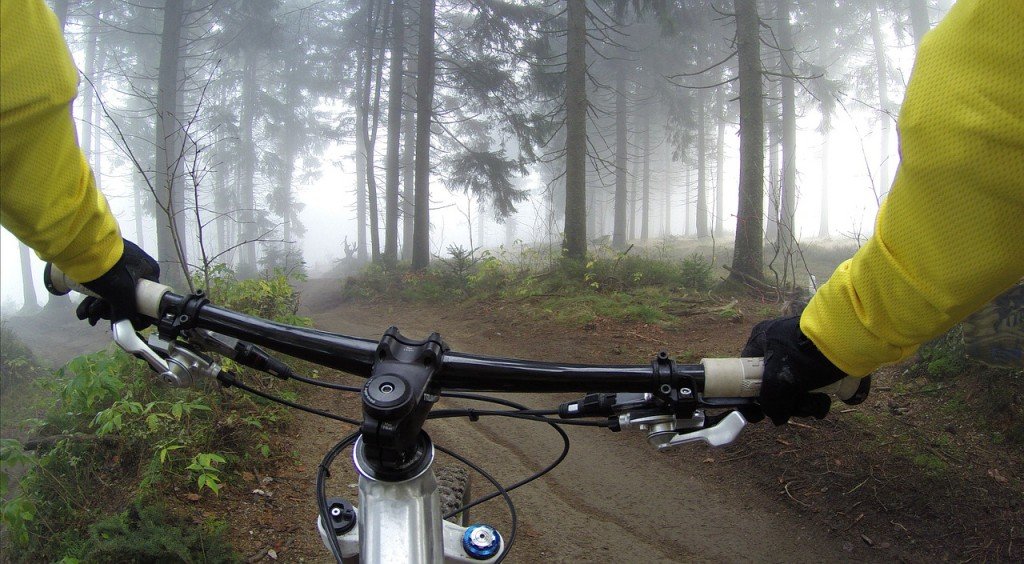 I went mountain biking for the first time a number of years ago.

My brother-in-law, who is an avid mountain biker took me on the “mountain” near his house. I say “mountain” in quotes, because if you were looking at it, you’d call it a  hill.

But to me, sitting awkwardly on my borrowed bike, it was a mountain. When we were ready to go, I asked if he had any pointers.

“What do you mean? I’m going to be looking at the trail. I think I’ll be too terrified to go sight seeing.”

“No,” he said, “Keep your eyes on the trail, but you’re going to want to visualize the path you’ll take. If you see a big rock in the way, don’t look at it – look at where you want the bike to go. There’s a tendency to stare at the object in the way  and that will make you crash right into it.”

“Great.” I moaned. Why was I up here? I mean, who in their right mind travels at high and uncontrolled speeds down a mountain on two wheels?

I should tell you that I have a track record for being clumsy. From early childhood, I’ve done some pretty graceless things – but I’ll tell you about those another day.

“Ready?” My brother-in-law asked, and without waiting for an answer he set off, nimbly steering through the first twists on the path. I took a deep breath and let go of the brake.

Terrified at first, as I continued I realized I was actually having fun.

And I saw the wisdom in the advice I had gotten earlier. My brain would scream, “Big rock, big rock!” and my eyes would widen as I sped toward it. I had to will my eyes from the obstacle and focus on the course ahead. Before I knew it, I was past the threat and sailing. It was exhilarating. And I didn’t even crash.

I tell you this story not to illustrate my superb mountain biking skill 🙂 I tell you because it reminds me of a theme I’ve seen in a few recent interactions about how to deal with problems:

Focusing on what you don’t want causes you to slam right into it.

Sometimes we focus on our perceived deficits, lack, the harms we have had done to us, or otherwise dwell in a negative space.

We think about the boss who was unfair, the job we didn’t get, our own sense of worthlessness, our back-stabbing friend and so on. These things are the giant rocks in our path, and they only lead us to bash ourselves against them, emerging scraped and bruised, and no further along our journey.

How to Keep It Real

So should you just ignore the “rocks” in your life?

How do you keep it real – that is, be aware of the problems without staying stuck in them?

The rocks in life are there to help you learn and grow, not so that you can endlessly hurtle yourself against them. Just like me on my mountain bike,

If you want to keep moving forward in life, you’ll need to chart your course and keep your focus on where you want to be.

Moving through a problem or difficulty is different from ignoring it or not examining its effect on you.

I’ll give you an example. I recently encountered a woman who was holding a deep grudge and was unable to forgive.

She allowed this to consume her (in a way that was negative and depressed rather than using the experience for prevention or advocacy).  She thought about it, read about it, and talked about it, in a way that made it clear that she was unable to move on. She was bashing herself against the biggest rock in her life.

She could have chosen to ignore the hurt, to disavow the feelings, and to repress the event that caused them – but this is an equally unhealthy approach.

Instead, here’s how she (and you) can stay on course while keeping it real:

When you can focus on something that gives you meaning and direction, you give yourself a reason for working through problems.

And not just any reason – a positive one, inspired by what could be, rather than a negative one required by your own emotional pain. Working through problems becomes what you need to do to get where you are going, rather than the sole focus of your existence.

And like me, you’ll get to the bottom of the mountain propelled by the promise of a great ride, instead of lamenting the injuries you sustained in the attempt.