Never Give Up Your Dreams: Pivotal Moments Change Everything 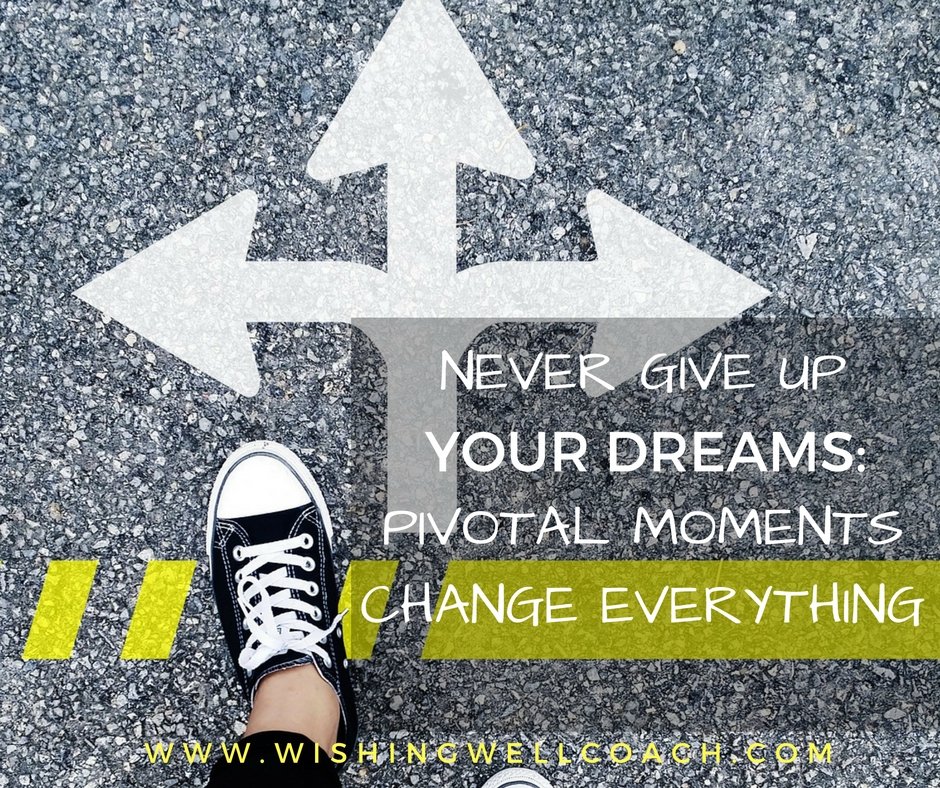 A young writer pounds away at a beat up old typewriter crammed tightly in his laundry room.

He works three jobs – one as a full time teacher, and the others in the summer doing industrial laundry and pumping gas. These jobs, along with his wife’s, barely keep his family – a toddler and a newborn – off of welfare.

For most people, finding time to write would be the last thing on the priority list. Especially with a stack of rejection letters as fat as this writer’s.

Still, he believed you should never give up your dreams, and apparently, so did his wife.

There were several opportunities for them to give up.

Like the time he was offered a small side job, one that paid $300 a year, but would eat up all his time to write.

Though it was tempting, he declined.

Or the time his wife found the beginnings of a story he had thrown in the trash, out of sheer disgust. She pulled it out convinced he had something, and encouraged him to continue working on it. . .

What Can Happen When You Never Give Up Your Dreams

See, this writer, the one who believed you should never give up your dreams, was Stephen King, and the book he threw away was Carrie, his first novel, which went on to earn him $200K (a life changing amount in 1973) and sell over 1 million copies in its first year.

But not before it had been rejected by 30 publishers.

Stephen King didn’t have it easy. He could have given up and been an unknown teacher from Maine with a couple of dusty novels buried in a drawer somewhere.

Instead, he’s one of the best selling thriller authors of all time.

He never gave up on his dream.

He knew that if he gave up, his dreams would have zero chance of ever coming  true.

So, he kept going.

Never Giving Up On Your Dream Means Focusing

What does this mean for you?

“Focusing is about saying no.”
Steve Jobs

When you focus on what you want, instead of decide that it’s time to give up, you say no to the things in life that you don’t want to be spending time on.

He could have taken a turn that would have changed his life and sealed his fate forever.

If he had, when you took a trip to Maine in the summer, Stephen King might have been pumping your gas instead of being the author of your beach read.

Deciding to say no to that job, tempting as it might have been, was a pivotal moment in his life, and believe it or not, you have many such moments even if you don’t recognize them.

For Stephen King, it wasn’t just about the job, or even the $300 a year, as much as he needed the money at the time.

It was really about the commitment he made to himself that he was going to carve out writing time, even if it meant taking the harder road.

Will you have to sacrifice something to pursue a dream? Will you have to step up to the plate in some way and commit to yourself or draw a line in the sand and finally say who you are, the way King said he was a writer, no matter what?

What turning point will you come to where you have to decide: “I’m going to bet on me.”

Your energy – at least the energy you have left after you’ve met your other responsibilities – is precious, and should be spent on something worthwhile that will matter in your life.

Maybe your turning point decision will be:

Mustering the energy to find some usable hours after work so that you can commit to a business idea.

Committing to breaking through the fear that tells you that you “can’t” or “shouldn’t” or asks “why bother” when you think about going after the career you really always wanted.

Or maybe you don’t have someone in your life quite as supportive as Stephen King does, and at every turn it seems like someone is holding you back from becoming the person you feel like you’re meant to be, so your turning point decision is that you’re going to find someone – a friend, a mastermind group, a coach – who will support you as you move toward your goals and dreams, whatever they might be.

Whatever your commitment is, you have to make it to never give up your dreams – or not. That’s the crux of your turning point decision. 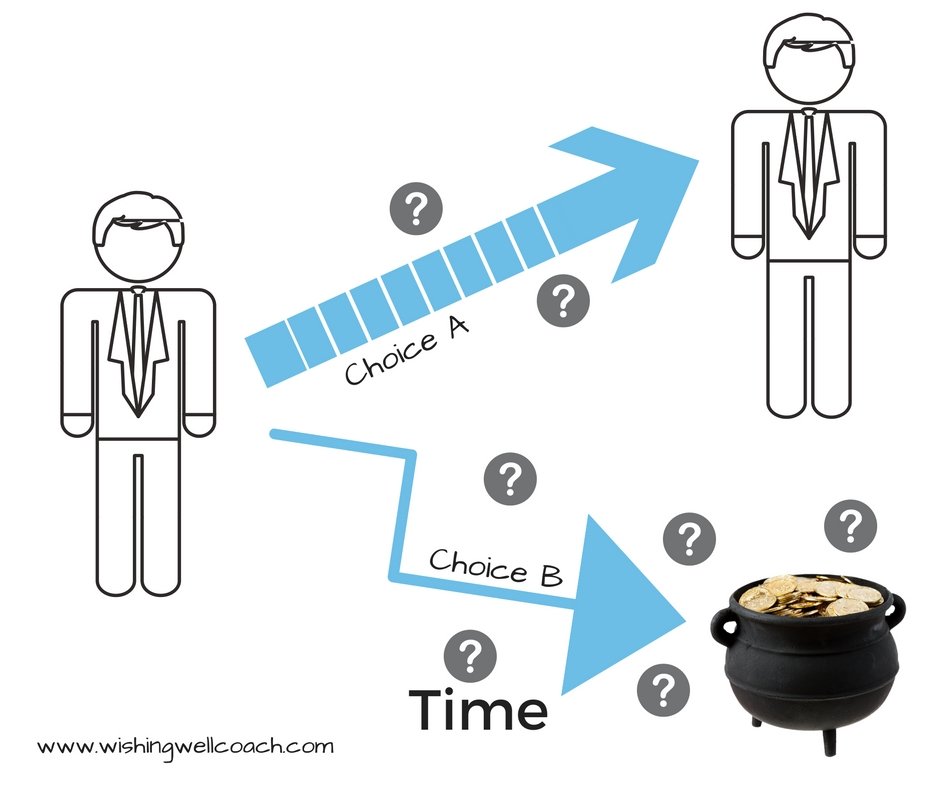 Look at the illustration above. There you are.

First, you have Choice A, which looks straightforward, but in the end leaves you being the same person you were before.

Then, there’s Choice B. Plenty of unknowns. (See all those question marks?) Plenty of twists in the road. And no assurances. But in the end, you might end up with that pot of gold you’re wishing for.

You know that you’re at a crossroads and that you have a choice to make.

Do the safe thing, or the thing you wish you could do?

Those moments fill us with a feeling of being torn or tormented. We feel like we really don’t know what the right choice is, and we’re terrified of making the wrong one.

Many times, there is a deadline for making a choice. These are the times when we’re most tortured:

Take this job (that pays more) or that one (that you know you’d love)?

Other times, when there’s no clear deadline, we drag our feet on making a decision, and end up making one by default.

Stay in this relationship or leave?

Stay in this job or quit?

These types of decisions prolong the agony, and, though they can be turning points for us and allow us to create a whole new chapter in our lives, they can also make us stagnate so that nothing seems to happen and we stay stuck right where we are.

There can also be moments in life when you look back and you realize that something you did was pivotal. That because you did something one way, a whole series of things unfolded that may have gone down differently if you had done things a different way.

When you make these decisions without realizing in the moment that they are turning points, the best you can do is try to live intentionally.

We can’t predict the outcome of everything, but we can set the direction of our lives and refuse to put ourselves on a track we don’t want to be on, like King did.

How to Make a Pivotal Decision

Where do you want to be in life? What are your goals?

If you can answer those questions, your pivotal decisions become much easier.

Can you identify what holds you back from pursuing your goals 100%?

Do you believe in yourself enough to believe that you can fulfill your dreams while not having your fears manifest?

If you would like to have a job you love, can you do that while still making a good salary?

Do you believe in yourself that much?

If not, that’s what you need to work on in order to make your decision. And to clarify, by belief, I do not mean some mind trick where you’ve convinced yourself that you can do whatever you want and that pigs fly.

What I do mean is that you’ve prepared yourself to the point that you now believe it.

Work, research, making connections and more will prepare you for what you want to do, and when you’re truly prepared, you’ll believe you can do it.

Instead of being held back and slinking into the darkness, never give up your dreams.

Prepare yourself so that you believe you can do it. Work on what you need to do so that you can pursue your dream and do it realistically.

Stephen King didn’t just hope and pray that someone would discover him. He sweated away on his rusty old typewriter, worked three jobs, and submitted his manuscripts and was rejected until it was almost embarrassing.

And then he hit it big.

Deciding he wasn’t going to give up changed everything.

And it will for you too.