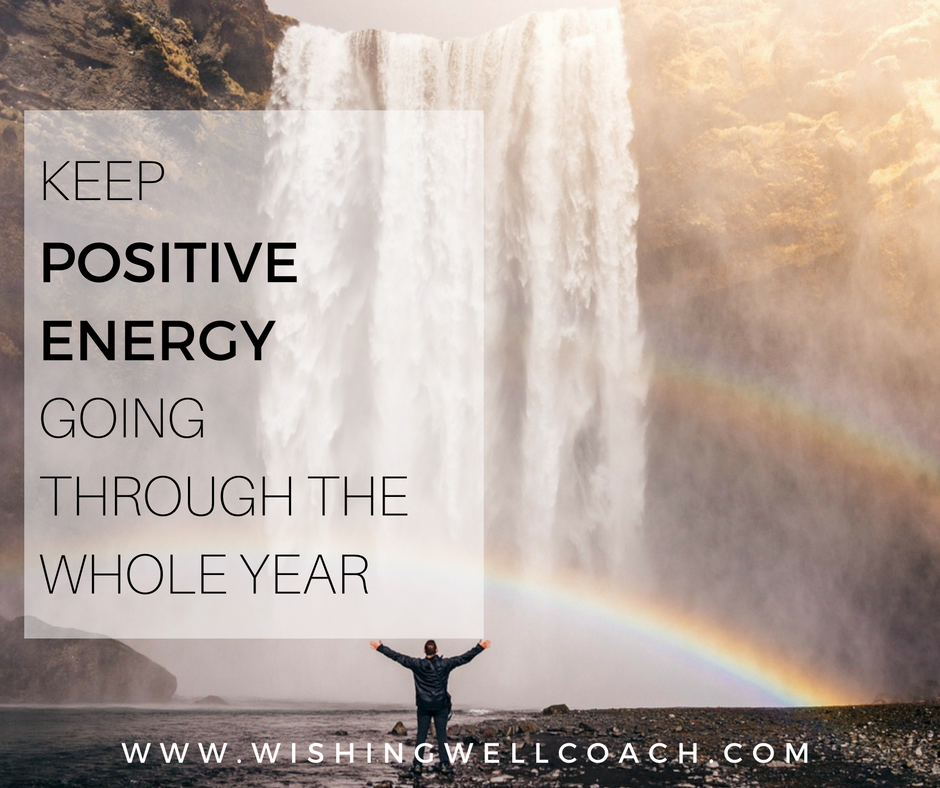 If you’ve started 2017 with resolutions and a ton of positive energy, it might be deflating to think that you’re going to fail miserably and that goals will fall flat in a few weeks.

It wouldn’t be the first time.

How do I know?

I used to start the New Year with a list of 25 or so new ways that this year was going to be different from last. Everything I wanted to revamp, from my health to my personal development to my relationships – every last thing that needed attention went on that list of resolutions to work on in that year.

And within a month they were toast.

Last year, though, I did something a little different. I tried an experiment, and it worked out way different for me than any other time before.

I put my energy into one thing, and I got pretty big results. I’ll tell you more about that later on. . .

You can do the same, and keep your positive energy flowing all year long, instead of scrapping your New Years resolutions as fast as you can say “chocolate cake.”

One thing that I noticed about resolutions and goal setting is this: People encourage us to have specific and measurable goals.

While that works in terms of giving yourself clear measures for success, it also puts your failures center stage. For some people, myself included, pointing out failure with certain things can be very demotivating, especially when it comes to bigger goals.

What can work better, is a delicate balance of setting out measures of success and pointing yourself in an overall positive direction.

In other words, putting more positive energy in the direction of the situation, or changing your mindset.

Let me give you a few examples.

If you’re trying to lose weight or get a new job, you might be tempted to set a number of pounds to lose or interviews to get, and even to put a date on it.

But then, if that doesn’t happen, it feels like a failure, even if you lost 11.5 pounds, or got 10 interviews and 2 call backs.

You still didn’t reach your goal. (Cue doomsday music.) Even though your goal was somewhat arbitrary to begin with.

Sometimes we don’t even make it even close to our goals because we give up.

A few weeks in, we haven’t gotten any interviews or we’ve eaten the entire chocolate cake, and we think that because we’re not going to make it to our set goal, all is lost. But using this new method prevents all that. . .

Instead of having lines in the sand that separate success from utter failure, try to have goals that you’re working toward, but give yourself the understanding that these goals are just the general direction you’re moving in.

Instead, your whole outlook and mindset should be shifting, and you’re putting positive energy toward that goal overall.

In your life, you’ll be doing what you can to lose that weight, get those interviews, reach your career or business goals, or whatever is on your resolution list this year.

It’s not just about one action to get one result, it’s about seeing what you can do to impact the outcome in every way possible.

Once your attitude has changed and it becomes less of a sprint towards the finish line, you’ll begin to be a person who acts in a way who gets those results.

In other words, if you’re looking to lose weight and you’re putting positive energy towards that, it’s all about making better choices and feeling less of a struggle with food, weight and exercise – you become a person who gets the weight and health results you want.

If you’re putting positive energy into your job search, you’re networking, thinking about your career from a more empowered perspective, and taking advantage of and creating opportunities. You won’t be able to help but to get the career results you want.

If you want to create other results in your life, putting positive energy toward them by being the person who demands success will get you there.

What would a successful person do?

What would someone who was healthy and their ideal weight do?

What would someone who had their pick of job offers do?

What would you do if you were the type of person who had already reached their goal?

What behaviors and attitudes would you adopt? Which would you ditch?

How I Shifted My Mindset And Changed My Year

I started this post by telling you that I got some pretty great results by shifting the way I approached my New Year’s resolutions back in 2016.

Like I said, I ditched my laundry list of ways to improve my life, and instead focused on one mindset shift, and put all of my positive energy towards that.

What I wanted was improvement in my business, in how efficiently my house runs and in the ease of my day to day life. What I noticed was that I was wasting a lot of time and that I needed to focus on what was really important to get done.

That was my big mindset shift.

That was it. Focus on what’s important.

Any time I got stuck in my business, in my home, or if things got overwhelming, I came back to that like a mantra. And it worked!

There’s still plenty of room for improvement, but I saw greater ease and greater productivity!

So how can you use this technique to get what you want?

How To Shift Your Mindset And Create Positive Energy

First, connect with something you want in your life.

What would your resolutions be?

Is there a theme to them like greater health or being more of who you really are? Is it finding that job that lets you be you?

Whatever it is, figure it out, and really feel it.

This step is important, because it’s the emotional connection that keeps us going when the hard work might otherwise get in our way.

Next, create a list of all the things that would be different if you already were that person.

What would be different if you already were:

Taking great care of your health every day?

Being exactly the person that you truly are inside?

Only doing what was really important?

Today I challenge you to write that list, and start living by it. It’s not about losing 12 pounds by April or getting 10 job interviews by March or any other such ideas.

Those goals are totally random. This is about really, radically shifting how you think and feel about what you do every day and then knowing that you have the power to make it happen not out of sheer force of will that will crumble as soon as you let go, but because you are about to become more YOU than you have ever been.