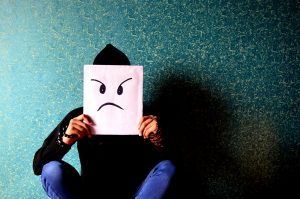 I love my husband. I really do.

That doesn’t mean he can’t be a real jerk sometimes.

He wasn’t trying to be a jerk. And in fact, if you ask him, he wasn’t being a jerk. But what he did felt a little jerk-y at the time. But in the end it actually ended up being one of the keys to success in my business.

Let me tell you the story.

You see, I wanted to make a substantial investment in my business, and like any big financial decision, I talked it over with him first.

Here’s what I proposed:

Instead of paying myself my full salary for the month, I’d take that money and put it towards my purchase. I saw it as a capital investment (fancy, right?) which would surely pay me back, so he didn’t need to worry about it.

I thought he’d be just as excited as I was! Yipeee!

He – being a numbers guy, has a high threshold for convincing. Meaning your argument has to be good. And mine wasn’t.

Sure I wanted it.

Sure I thought it would give me a good return on my investment.

But where was the proof? Where were the numbers, baby? And if I was going to essentially take a loan to do it??

Needless to say, I wasn’t happy. I felt he was being controlling, unhelpful, and mean (and those are the nice words, cleaned up for this family-friendly blog.)

I could have decided that it was my business and my money and ultimately my choice, because I’m an empowered woman and nobody tells me what to do. . . but when was the last time he said that about his paycheck?

Just not how we roll in our family.

And one other thing. Deep down, I knew he was right.

Not only do we not do that in our family, we keep our commitments to each other. And I have committed certain things related to my business and my income.

Despite what you may have heard, quitting your job and working for yourself like I did isn’t just about doing what you love.

Because as one of my lovely clients so powerfully put it, “Being broke isn’t fun.”

No. She went on to eloquently describe her beliefs on how having and not having money can limit or expand your choices in life, and how those choices can create or diminish your happiness.

So when it comes to pursing a passion based business, it’s not just about finding what you love to do.

It’s also about making enough money doing it. Because being broke isn’t fun, and if you’re broke you won’t love what you’re doing anymore, or at least be able to do it for long enough to keep your electricity on for long enough to finish this blog post.

Two Lessons: The Keys To Success

So back to my poor, maligned husband.

In that moment, he taught me two very powerful and painful lessons. I’m going to share them with you here.

Lesson 1: The power of an outside perspective.

You’d think as a coach I’d know this already. I coach people on this kind of stuff – and I’m really, really good at it. . . but when it comes to looking at my own situation, my feelings got in the way. I wanted to make this investment badly, and my desire got in the way my seeing things objectively. His outside perspective on it really helped me see that there were other factors involved (my husband’s feelings, for example).

When it comes to you, recognize that coaching can be really powerful in helping you see things from another perspective and not through your own world view. It’s so hard to move away from our own perspective without help.

We’re all human, and we all get tangled up in our own feelings, thoughts and perspective, no matter how hard we try not to.

Your feelings and the way you think about things can color your world so thoroughly it can be like you’re moving through life on auto-pilot.

For me, it was only until my husband basically told me that I was a raving lunatic that I stopped and reassessed whether I was thinking clearly or not.

This lesson was probably the biggest one for me.

Maybe you’re running as fast as you possibly can and then. . . wait, running? Ok, let me try again.

Maybe you’re standing up for yourself in a confrontational situation. Know when you’ve gone as far as you think you can go?

But then you push yourself just a little bit further. . .

It’s more than even you thought you could do. You’re pushing through limits you didn’t even know were there.

It was that way for me.

To get this thing I really wanted, I had to figure out what needed to be done, and I had to do it. I had to go places in my mind I’d never gone before. I had to dig deep.

And once I’d dug that hole, once I realized I could do that, there was no going back.

The only question I had was,

How much further can I go?

That question has transformed my business.

I don’t tell you this story because it’s fun for me or because I think I’m cool (does anyone say that anymore? Or anyone who is, well, cool? Anyway. . .) I tell you because it’s a story about unlocking potential.

Your potential has been locked up deep inside and buried deeper than Blackbeard’s treasure.

You already know that you’ve got something to contribute with your talents, your passion, your you-ness that just isn’t coming across in the work you’re doing now.

So what kind of a difference would it make if you dug deeper? If you pushed yourself beyond limits you didn’t even know you had?

Where I Buried The Body

No seriously, in the end, I was a big enough person to admit that I was actually wrong, and he was right.

Instead of dipping into my income to pay for my investment, I worked my butt off to make enough to pay for it plus my salary.

Instead of holding on to the idea that I was a victim and that someone else should let me off the hook or pony up the extra cash, I was forced to ask myself “What can I do here?” It’s a question I’m used to asking, but this time the answer came hard – and now, I’m grateful.

I’d love to hear from you. When has your back been against the wall? When have you had to dig deep or been forced to grow? What are you striving for? Let me know below!

Ready to Unleash Your Potential? Grab My Most Powerful Personal Development Guide Ever, Here!
Click Here to Get It!
Previous
Next